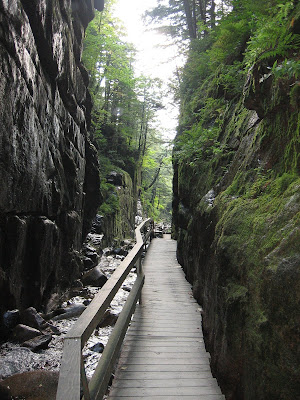 I took this photo of a geological formation known as 'The Flume' this September at Franconia Notch State Park in New Hampshire.

It was a beautiful, serene, sublime place, and one that I feel blessed to have seen. I suppose one could look at it as simply a bunch of rocks, interesting maybe, but nothing worth writing home about. I know people who would certainly take this view.

But I disagree. We drove nearly two hours to see these rocks. When we looked at the guestbook in the information center, it had been signed by people from Michigan, California, Japan, Germany. People from Germany did not come to New Hampshire just to see a bunch of rocks.

People come to places like this seeking an experience. I suppose for each person it might be different, but for me, I'm certainly seeking the sublime, the transcendent, a place where the ego dissolves and there is only spirit and awareness and feeling.

The fact that this rock formation in central New Hampshire holds sway over people shows me that it is in our nature to seek and embrace beauty, and especially the beauty of the natural world. We clearly crave it, and it clearly nurtures us, or we'd never bother.

My friend, who taught in Japan for a year, commented that had this formation been in Japan, the path we were on would have led to a temple. At the time, I joked that once at the top, we'd probably find someone selling ice cream or t-shirts: "See the Flume--It's Gorge-ous!"

Fortunately in this case, there were no shops. No temples, either, but at least we had the opportunity to make what we wanted of it.

Find the place of natural beauty nearest to you that would have a temple if it were elsewhere. You'll know it when you see it. Spend time there occasionally. Go ahead and have an ice cream, if they sell it. But get quiet, and allow the mystery of its beauty to work on you.
Posted by Tiffany Hamburger at 6:26 PM