Find Your Place of Transformation 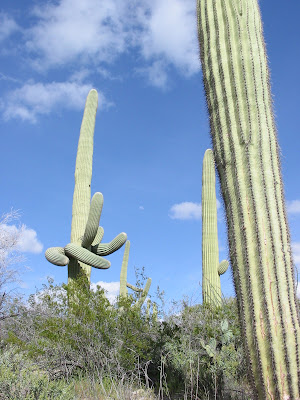 This photo was taken in Saguaro National Park West, just outside of Tucson, Arizona.

One of the reasons I decided to go to graduate school there was because I had never lived in the desert, and I thought, "I want to know what that's like."

In some ways, inside the city, it's much like any other place: strip malls, movie theaters, even neighbors who stubbornly refused to acknowledge their local environment and so had heavily irrigated, golf-course style lawns.

Though you had hints of the desert in town, it was only when you left the developed areas and went into protected, real desert that you understood how fundamentally harsh and unwelcoming the desert is to humans. (Though of course the Pima Indians and other tribes developed the knowledge to live there--I'm just saying you need that kind of culturally transmitted, specialized knowledge to survive.)

Never had my skin been so dry, never had I had nosebleeds. Never did I have to squint my eyes shut when the dust storms would blow through and I'd be caught outside. Never did I encounter so many poisonous, prickly and otherwise unfriendly life forms.

And yet the desert is unspeakably breathtaking and awe-inspiring and, maybe most importantly, thriving. This is no dead place. The forms of life I saw may have reminded me of aliens, but there was life everywhere. Any niche that could be filled, was. Any evolutionary trick that could be tried, had been.

The perseverance of life. Its unwillingness to give up, its ability to change as needed to survive and then proliferate. This is one of the lessons the desert has to teach.

One day, very early on in the program, I was feeling lonely, frustrated, confused, uncertain that moving to Tucson to do this graduate program had been the right decision. I wandered into a store selling Southwestern furniture and crafts, looking for a gift. I was alone in the store, and somehow, the friendly owner and I struck up a conversation. I suddenly began pouring out my fears and concerns--practically telling this guy my life story. It just came rolling out of me, and I was lucky he was so willing to listen. When I finally stopped, he paused, and looked at me.

And while I didn't know it at the time, he was right. Being in the stripped down harshness of a climate that felt like a constant assault began to effect a change in me, as did my studies. But as I found myself staring up at majestic, towering saguaros, and listening to the scour of wind against canyon walls, I couldn't help but be changed. Evolution and adaptation was all around me.

I'm not saying you have to move to the desert or the tundra to find your place of transformation. Tucson was it for me. But think about where--geographically, occupationally, personally--you will find the challenges that will force you to grow stronger, to thrive in any conditions.

Go there, and prepare for transformation.
Posted by Tiffany Hamburger at 10:06 PM

Email ThisBlogThis!Share to TwitterShare to FacebookShare to Pinterest
Labels: meditations