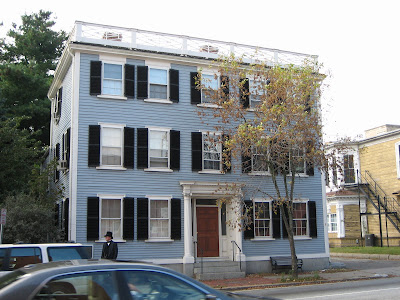 Okay, not really. I don't know how to (literally) sail, but a vacation--the reason the blog will be quiet for a few days--is definitely a voyage of adventure, surprise, and always at least a little risk.

The house above is in the place I'm headed--Salem, MA. The house above also happens to have been owned by one of my childhood heroes--Nathaniel Bowditch. (There he is, bottom left, in the top hat!) He was the subject of Jean Lee Latham's book Carry On, Mr. Bowditch, which was one of those childhood books that had a profound effect on my young mind.

Here's how the Wikipedia entry summarizes the plot of the novel:

The novel introduces readers to young Nat Bowditch, a boy who loves school, and especially mathematics. He dreams of someday attending Boston's Harvard University, but is forced by economic circumstances to quit school and begin working. Eventually, he ends up as an indentured servant to a ship's chandler. Still determined to continue his education, he begins to study (and master) advanced mathematics in the evenings after work.

When his indenture is complete, he gets the chance to go to sea. There, he discovers that many of the navigational sources used at the time contain extensive and dangerous errors. He is prompted to compile a new book of navigational information. This book, The American Practical Navigator, is still in use today. Under several captains, Nat learns how things work at sea. He invents new ways of calculating latitude and longitude, increasing the accuracy of calculations used to find ships' locations. Eventually Nat becomes a captain himself.. At the book's end, Nat receives an honorary degree from the school he always wanted to attend, Harvard.

His story was such an inspiration to me as a young girl--the amazing way he triumphed over the odds, the challenges he faced, the talent he had that he refused to give up on--he was certainly a hero.

Joseph Campbell talks a lot about the hero's journey, viewing it as mythic instruction for how we should strive to live our own lives.

I read a post today at the Shane & Peter, Inc. blog about getting a mentor, and I think it's priceless advice that I will definitely heed. But I think it's so important to have heroes, too, be they living or dead. Sometimes I actually prefer the dead ones, just because they have stood the test of time and have gained a lustre that shines as a beacon for us when times seem dark. They reach out across the ages and give encouragement through the legend and example of their own lives. That their stories resonate even today is immensely heartening, because they too were human. It's like that line in the latest Harry Potter film:

Every great wizard in history started out as nothing more than what we are now. If they could do it, why not us? Well… why not us?

Indeed. Why not me? Why not you? Carry on, dear reader. Become the hero you loved as a child.

Posted by Tiffany Hamburger at 10:08 PM