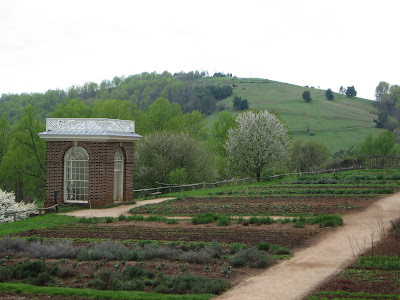 This picture, taken this April, is of Thomas Jefferson's terrace garden at Monticello.

I was there recently, and while I'd been there once while I was in high school, I'd forgotten what a beautiful, serene place it is. No wonder Jefferson desperately wanted to return there after his presidency was over.

One of the things I forgot (or maybe didn't ever know, hard to say) about Jefferson was that he was a committed, passionate gardener. He ordered seeds from catalogs, shared cuttings and seeds with neighbors, and kept detailed logs about what he had planted and how it did.

Interestingly, I learned that he met with failure again and again and again. For example, he was determined to try to grow wine grapes, but never succeeded.

I am a new gardener, and have already learned a lot that I didn't know. So much knowledge has not been passed on, and so though it exists somewhere on the web or in a book, each discovery feels as new to me as anything could. For example, I had no idea that lettuce "bolted" in hot weather. I didn't know how much plant was created to grow one single crown of broccoli. I mean, wow, broccoli is a massive plant!

Why should this be? Why do I find failure in other areas of life so frustrating, but not here?

I think because my approach, much as I have read Jefferson's to have been, has been one of a fascinated experimentation. Everything is new, and everything is a surprise. Everything is something to watch. I am not as eager for the results--though they can be delicious--so much as for the satisfaction of cultivating something living, surprising and literally wonder-full. I know it is a cliche to be amazed by a tiny carrot seed becoming a carrot, or a little broccoli shoot becoming a towering plant, but it is only a cliche until you have experienced it yourself. Once you have seen it with your own eyes, you realize the miracle.

There's a big movement, at least in the U.S., to grow your own backyard veggies. Since Jefferson always envisioned a nation of self-reliant, educated citizen farmers, I think this is a very good thing for our spirits, as individuals and as a nation.

While I advocate gardening, it's certainly not mandatory. But I think what should be required of every bliss-seeker is the kind of watching--the expectant attention--that the gardener gives his plants, but to as many things and as many people as you can.

It's easy to form an opinion, to have a thought, to say your piece, but it's much more important to Watch.
Posted by Tiffany Hamburger at 8:48 PM